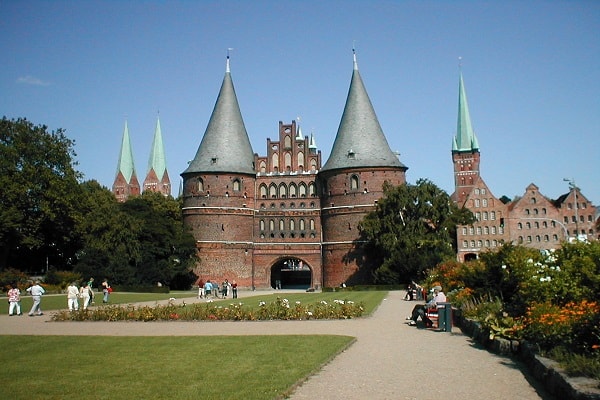 In addition to the Brandenburg Gate, the Cologne Cathedral and the Munich Liebfrauenkirche, there is hardly any other German building that enjoys such popularity worldwide as the Lübeck Holstentor. It is the proud symbol of Lübeck's history as a free city and its supremacy in the eastern part of the world - and an embodiment of all the ideas of the Hanseatic League, trade, power and wealth, and therefore of everything that makes Lübeck's historical significance. Inside the monument, the Museum Holstentor, it's about these topics. Behind up to 3.50 meters thick walls is the exhibition "The power of commerce", because on the trade, the success of the Lübeck merchant founded the importance of the medieval city. The Holstentor was built in the years 1464-1478 by the city master builder Hinrich Helmstede after Dutch models and served from the beginning both the defense and the representation. The building is a twin towers with slate-roofed conical roofs formed by two mighty towers, the middle of which forms an intermediate wing in which the round-arched entrance gate is located. Two terracotta giants encircling the gate as straps visually tie up the entire system and divide the field side into only three storeys, although there are four of them inside. The intermediate wing is crowned by a mighty, only in 1864-71 built in this form stepped gable.